Do you know what the largest pigeon in the world is? If you guessed the Victoria Crowned Pigeon you are right! it lives in New Guinea. It eats various types of fruit for example: Figs. they have 3 types of cousins like: Western Crowned Pigeons, Southern Crowned Pigeons & The regular New York Pigeons. They also do-do what Pigeon do-do best. The giant tortoise is the biggest turtle to ever walk on land.  They can weigh up to 660 lbs.  and can be as long as 4 ft. long! They come all the way from the cretaceous period! The cretaceous period was 70 to 80 million years ago. They can live to be 100 years or more! Whale hunters use the meat of the giant tortoise to eat. They are one of the most endangered speices of animals, so their under complete protection. Giant Tortoise eat leaves, grass, shrubs, and cacti, which makes them herbivores. They also enjoy some fruits such as apples and bananas. Giant tortoise lay between 9 to 25 rubbery eggs at once. The Giraffe is the tallest animal in the world.  Its neck alone can be 7 feet in length. It is the biggest “ruminant,” (i.e. it digests plant material in its stomach).  It is an even-toed ungulate mammal.  It is only found in Africa.  The average weight of a male giraffe is 2,600 pounds.  The average height is from 14-17 feet tall. The giraffe is found in savannas, grasslands or open woodlands. They frequent areas that have acacia trees.  They can drink large quantities of water at one time, which allows them to live in very dry areas for long periods of time. The giraffe has the shortest sleep time of any mammal at 4.6 hours per 24 hour period.  The only dangerous predators to adult giraffes are male lions and leopards.  The kick of a giraffe can kill predators.

A Kudu is a type of deer that has swirly horns on its head and  it only lives in Africa. You can verify the Kudu by its silvery/ gray coat, and it’s massive horns. they are hunted by lions, cheetahs, humans, hyenas, pythons. Believe me I have no idea how a python can eat a Kudu. Their horns can be up to 20 (small) 59 (XX large) measure around the curve. Their horns are used by the Jewish people as a musical instrument known as a shofar. Looking at the Kudu it;s beard makes me think of a goat, body of a camel, legs of a deer, ears of an elephant (Dumbo) and does not rely on water only after four days. 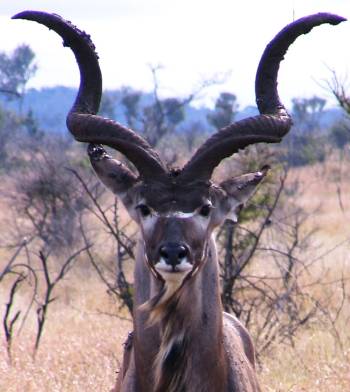 The ocelot is a small cat that lives in: Texas, Mexico and forests, but mostly rain forests. They are close to being endangered and extinct because of hunters that are trapping them for their coats. They are mostly active at night, so they are nocturnal. They have teeth that can go through bone and a tongue that can take off flesh with one lick. That’s how much grip a ocelot’s tongue has. They can be anywhere from 18 to 20 inches in length, ??? in height and weigh 18 to 40 pounds. This is why they are often mistaken for a house cat.

Here is a video of the western parotia –

The Western Parotia is a funny looking bird that lives in the high mountains forests. The western parotia female is bigg

er than the male western parotia bird. The male dose everything he can do to attract a mate. He makes sounds that attracts a mate and he dose a little jig with a call. He has some feathers that he puffs out (sort of) but it’s more like a stretch out kinda thing.

Welcome to your brand new blog!

This is a sidebar and can be changed in Widgets in your dashboard.

You can also modify number of sidebars in theme options!